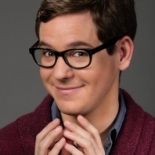 Ludovic Coutaud was born in the French Riviera in the vibrant city of Marseille. Already from a very young age, he needed to express himself, talk, sing, dance, find his way through youth, teenage years and adulthood. Thanks to his observant mother, he was able to experience Theatre at the age of 5 surrounded by other small folks like him and hit the stage the following year as young Molière. Like a beverage of knowledge, he knew he had to act, but not only. Writing and directing were too a passion of his.
At the age of 18, released from school after obtaining his High School Diploma, he felt everything was possible and whatever he wanted to do he had to work hard to get it. His parents and his sister backed him up on his artistic journey. After the creation of his first original stories told through various short films, he aimed for the first impossible dream, New York City where he studied at the renowned 'New York Film Academy'. From then on began his quest to tell the world his stories.